What I learnt from our son’s rare disease 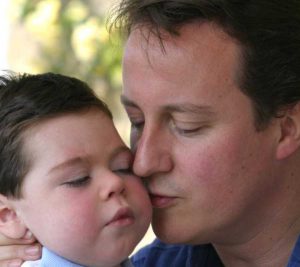 Article by David Cameron, originally published in the Times on 28 February 2018.

Picture this. The most precious thing in the world to you, your newborn child, is deeply unwell, suffering with painful seizures. You know that every time it happens it could be doing damage to their development. They go through test after test, many of them intrusive and painful. Different treatments are tried, some with excruciating and potentially damaging side-effects. Huge efforts are being made on your child’s behalf, but no one knows exactly what is wrong or how to make it right.

I know because I’ve been there. My eldest son, Ivan, was born with what we later found out was Ohtahara syndrome, a neurological disorder so rare that there was barely a diagnosis, let alone a cure.

I will never forget the moment of being told that he was likely to be severely disabled. Sitting in the doctor’s room. Trying to understand the immensity of what is being explained to you. All your hopes and dreams about the life your child is going to have and the realisation that it’s not going to be like that. It’s a shock and takes a huge amount of time to get over it — but we did. We were all devoted to Ivan and as a family we still talk about him all the time today.

We were bowled over by the heroic attempts of doctors and nurses to treat and care for Ivan, but we were also reminded of how little we know about conditions such as epilepsy and some of its rare syndromes.

When it came to the question of having more children, my wife Samantha and I were offered something that was very much in its infancy then: genetic counselling. Because there was no certainty about whether Ivan’s condition was inherited or more of a one-off, we were given a “blended probability” — 1 in 20 — that any future children could have a similar condition.

Fortunately, we went on to have three healthy children, but very sadly lost Ivan in 2009. He was only six years old.

Epilepsy affects 1 in every 200 children. Of those, just 1 in 500 are affected by Ohtahara. In other words, there are only a handful of children in the world who have it.

However, rare diseases aren’t all that rare. There are an estimated 350 million people around the world living with rare and undiagnosed genetic disorders, more than the number of people with cancer and Aids combined.

Half of all sufferers of rare diseases are children and nearly a third won’t live to see their fifth birthday. I think of all the parents around the world going through what we did — not only the anguish of seeing their child suffering, but also the frustration at the lack of diagnoses, treatments and knowledge about what has happened and why.

In many cases the doctor is unlikely to have seen a patient with the same condition before. They are left to rely on intuition and antiquated tests to determine which of the 7,000 rare diseases may be affecting the child.

If a sample is sent out for genetic testing — looking for abnormal chromosomes or mutations — it is often done for one disease at a time. A few weeks later the results return. If they are negative, another test for a different disease is ordered. This gruelling process can go on for months, even years. If a correct diagnosis is eventually made it is often too late to undo critical damage that has already been done to the child’s development.

Yet we are on the brink of a huge breakthrough. We have access to the comprehensive technology of clinical whole genome sequencing. Instead of looking at individual chromosomes, we can sequence the whole genome, determining the unique ordering of three billion letters found in almost every cell in a person’s body. Rather than testing one disease at a time, this process simultaneously can test for all rare diseases, 80 per cent of which are genetically based. All it takes is a blood test. It is that simple.

If my experience as a father showed me how little we knew about rare diseases, becoming prime minister at a time when these enormous leaps were being made opened my eyes to how much we could know. The visits I made, the research I read and the meetings I had with top experts, including the chief medical officer and chief scientist — who were huge influences on my thinking — pointed to how unlocking our DNA could transform healthcare.

The UK has a proud heritage in this area of science. It was James Watson and Francis Crick who 65 years ago discovered the twisted-ladder structure of DNA, one of the major advances in human history. And Frederick Sanger made the key breakthrough that led to successful genome sequencing.

I wanted us to remain at the forefront of this revolution by helping to turn this important breakthrough into something that could deliver better tests, drugs and care for patients.

In 2013 I set up Genomics England to run the 100,000 Genomes Project, which aims to sequence 100,000 genomes from NHS patients with a rare disease and their families, as well as patients with cancer. In 2014 Genomics England formed a partnership with Illumina, in California, which I am delighted to be working with now that I have left office.

Illumina’s work is incredible. One study that has particular poignancy for me was conducted at Rady’s Children’s Hospital in San Diego and documented a comparison between two children, one born before Illumina’s rapid genomic sequencing had been implemented there and one born afterwards.

It took six weeks to diagnose the first baby, born in 2015, with a variant of Ohtahara syndrome. In the wait for a diagnosis the baby sustained severe neurological damage.

A year later another newborn baby started experiencing seizures. Analysis of her entire genome revealed that she had the same variant of Ohtahara, enabling doctors to give her targeted medication immediately. Today she shows no signs of significant developmental harm.

Today is World Rare Disease Day, which gives us an opportunity to celebrate the strides that are being made. It is also a chance to redouble our commitment to making progress and to overcoming the specific challenges that we face with this issue.

First we need to continue to drive down the costs involved. In 2007 you would pay $1 million to sequence a human genome. By 2014 Illumina had reduced that cost to $1,000. Now all efforts are on getting that number down to $100.

Next we must focus on what happens after diagnosis. Currently, only 5 per cent of rare diseases have an approved treatment. More needs to be done to increase the incentives for pharmaceutical companies to research diseases that affect only a few people and therefore may not be viewed as cost-effective.

Then there is the much needed support that accompanies the science. Today I am opening a school run by Young Epilepsy. Research conducted by the charity reveals the impact that epilepsy and related conditions have on families, with parents — particularly mothers — more likely to be diagnosed with depression and anxiety. That is not surprising at all. There are very few things that compare with watching your precious child having seizure after seizure and feeling powerless to do anything about it.

The word “transformational” is hugely overused, but on this occasion it is justified. Over the next decade genomics should transform the way we do medicine and healthcare.

Of course, that is not to say that it will always supply solutions. In many cases genomic sequencing can help to understand a condition for which there are only limited treatment options.

I think of one particular example: a child who was suffering from a degenerative neurological condition that no amount of testing could diagnose. She and her family endured nine whole years struggling for answers, but when Illumina sequenced her genome it was revealed that she had a mutation in a gene, which allowed iron to accumulate in her brain. Here the treatment options were limited.

Indeed, that’s what genomics does: it gives us hope. And it allows us to picture a different scene: one in which every child in paediatric intensive care can receive a quick diagnosis. No more unnecessary testing, futile surgeries or ineffective treatments. No more parents burdened with the anguish of uncertainty. Instead, information that prevents children from further harm — prolonging, even saving, their lives. That should be our goal: every child in paediatric intensive care having that simple yet vital genomics test.

It is so important — and urgent — that we continue to seize developments like this. I think back to all the treatments that we went through with Ivan and all the help that we had — and we really did have the best of the best. One of the great things about our National Health Service is that it is there for you 24/7 and it does include specialist centres such as Great Ormond Street Hospital. When you’re there you know you’re getting the finest in the world — and it is a huge comfort.

But that will only stay true if we keep up with modern technology and keep investing in these advances, such as genomics. Beating these diseases is within our grasp, and it is something to which I am wholly committed.