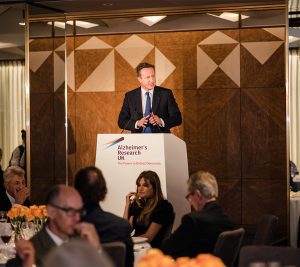 Thank you to Lady Mackintosh and ShareGift for your support tonight.

And thank you to everyone for being here.

We meet, of course, on the eve of the General Election – so this is all rather strange for me.

It’s the first election since 1992 when I’ve not been at that rather surreal place called “the count”.

It’s usually in a leisure centre. You wait, with your opponents, for hours – often right through the night – to hear whether you’ve been elected.

You sit on gym equipment, eating vending machine snacks and wondering why on earth you submitted yourself to this torture.

In fact, I half expected Alzheimer’s Research UK to sit me on a plastic chair between a Monster Raving Loony and member of the Bus Pass Elvis Party, just to make me feel at home.

So when I say I am delighted to be here with you at the Berkeley Hotel, I really mean it.

Three questions for me tonight. Why dementia? Why me? And why now?

Dementia – of which Alzheimer’s is the most common cause – is described as “one of the world’s greatest medical challenges”.

I would go further. I would say this is one of the world’s greatest challenges, full stop.

Dementia now has the distinction of being the biggest killer in England and Wales.

There are 850,000 people living with condition today. There will be 1 million in this country by 2025. By 2050, the number will have trebled globally.

And what a cruel killer it is.

I’ve seen it for myself. In the week that I resigned as Prime Minster, I was back in my constituency of Witney, visiting a care home.

I sat with a woman who was surrounded by her loving family. She grabbed my hand and looked deep into my eyes.

As I looked back at her, I could see that she had no idea who I was, who she was, or who any of these people were around her.

And yet, despite all this…

…despite the increasing number of people affected…

…despite the pain it causes them and their families…

…despite the impact that it has on our country – with a higher social care cost than cancer, heart disease and stroke combined…

…still we are lagging behind when it comes to defeating this dreadful condition.
Not just a bit behind.

A generation behind cancer and heart disease in terms of research and public perceptions.

Of the top-ten biggest killers in this country, this is the only one that – right now – cannot be prevented, slowed or cured.

That’s right: there is no such thing as a dementia survivor.

Look at it this way.

This condition was first observed in Germany 116 years ago by Dr Alois Alzheimer.

Here in Britain, Queen Victoria had just died. We were at war in South Africa. Our first ever cinema had just opened.

And our biggest causes of death included dysentery, TB, flu and diphtheria.

With the breakthroughs in medicine we’ve seen over the last century, it is almost unthinkable that people in this country would die from those things today.

But still they are dying from dementia. Despite the scientific progress, there have been no breakthroughs in treatments for this condition.

We can do little more for a patient with dementia today than Dr Alzheimer could do for his patients in 1901.

Progress is long overdue. That’s why dementia needs us.

The second question is: why me? Why am I backing this cause?

As many of you will know, when I was in 10 Downing Street, I made dementia a personal priority.

I launched the Dementia Challenge, doubling government funding between 2010 and 2015.

I made sure research was better funded and wards and care homes were more dementia friendly.

I used the UK’s G8 presidency to put the issue at the top of the international agenda, hosting the world’s first ever dementia summit.

I was excited by the medical challenge, yes.

But I was also excited by the communications challenge.

One of the reasons we haven’t made the progress we should have is that too many people think that dementia is just a natural part of ageing.

It isn’t. It is caused by diseases of the brain, like Alzheimer’s.

Just as we’ve cracked – or will crack – other diseases, there is nothing to stop us cracking this one.

I might have left office, but the drive to help defeat dementia has never left me.

…not just here, but right across the world.

It will be a huge coalition that defeats dementia. Luckily I know a thing or two about leading coalitions.

I also know a fair bit about speaking out on the biggest issues we face.

And this condition – one that silences those affected – needs a voice more than most.

So that is why I’m determined to play my part.

The third and final question is the most important: why now? Why is this the moment to redouble our efforts to defeat dementia?

I’ve talked about the need – a growing population, other killer diseases being tackled, more and more people being diagnosed.

But there is also the fact that we have a charity right here – the fastest-growing research charity in the country – that is poised to make a real difference.

I’ve worked with many brilliant people in the voluntary sector over the years.

But Alzheimer’s Research UK is as impressive as it gets.

Why? Because of the laser-focus it has on research – on seeking those preventative measures, those treatments, and that cure.

And because of the crucial strategic position it occupies between academia and the pharmaceutical sector.
The strength of ARUK comes at key moment.

For we are at a really important juncture in the mission to defeat dementia.

We know more about the biology of dementia than ever before.

We know more about the disease processes behind it and the angles of attack to slow or halt those processes.

We know that we need to focus on breakthrough treatments that can be given before symptoms take hold – as well as improving symptomatic treatments for people in the grip of dementia today.

We know that improving the incentives in the market to develop the drugs will be key.

And we know that the diseases of the brain that cause dementia can be cured.

What’s more, there is a positive when it comes to the fact that we lag behind the progress made in other diseases.

Because we have the advantage of being able to follow the example of others’ success.

When it comes to research we can look at cancer, and the surge in survival rates for many different types.

When it comes to public perceptions we can look at AIDS, where the stigma is disappearing and people are living long and healthy lives.

When it comes to changing behaviour we can look at heart disease and strokes, where the fall in deaths has been linked to healthier lifestyles.

When it comes to increasing the incentives to develop drugs we can look to the progress that has been made on so-called orphan diseases, where more and more drug companies are focusing on neglected conditions.

From all these developments we must take heed and take heart.

But myths can be dispelled, defeatism can be overcome, and the biggest battles faced by humanity can be won.

The time to do so is now.

I want to end by sharing with you the way I see this challenge.

We may not be at that stage where we are about to push the boulder over the hill.

But with everything that’s going on…

…with the 111 research projects ARUK is funding right now…

…with the drive towards finding those new treatments…

…and yes, with events like this, where key people are coming together to pledge their commitment…

…we are at the point when we are ready to push that boulder up the hill.

Because it won’t just be the scientists in the labs who find the treatments and ultimately the cure for dementia.

It will also be the people taking part in the drug trials.

The regulators who open the gates for new medicines.

The medics and nurses who diagnose patients and administer the treatments.

It will be the politicians who make the laws, the charities who galvanise and educate people, and yes, the supporters and philanthropists – many of you here in the room this evening – who I hope will fund this critical research.

Because without you, none of this can happen.

Dementia is ruining many, many lives. It does not have to be that way.

It is not written that this must remain our biggest killer.

Or that one million people in our country will be trapped in a slow, silent and lonely death.

Or that your loved ones will slip away without knowing who you are, or how much you love them.

Or that it could be you.

Let’s write a new and brighter chapter in our great medical history.

And let’s crack this too.