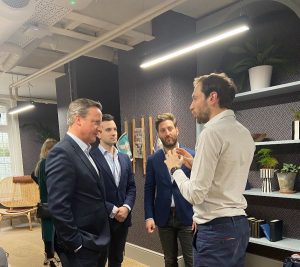 This week David Cameron visited Public Hall to meet the community of start-ups who are working to transform public services with the latest technology.

Public Hall is the first co-working space dedicated to GovTech, based in the former MI6 headquarters on Horse Guards Avenue, Westminster. It is run in partnership with the venture firm, PUBLIC, the brainchild of former Downing Street Special Adviser, Daniel Korski.

David Cameron said: “Public Hall is truly where Silicon Valley meets Whitehall. Walking around you meet the brightest minds devoting their immense talents and resources to transforming the way government does things. The innovations flowing from that building have the power to change our lives. It’s very exciting.”

The governments led by David Cameron between 2010 and 2016 prioritised FinTech, e-commerce, coding in schools, big data and digital public services. A series of reforms, such as releasing vast swathes of data, enabled new start-ups to flourish. By the end of his premiership, the UK was ranked by the UN as the most digital government in the world.