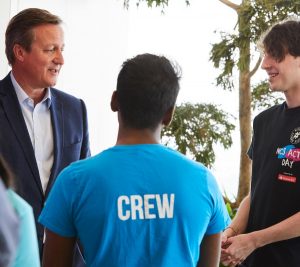 Article by David Cameron, originally published in The Sun on 14 July 2017.

There are teenagers in Britain today who have never visited a different part of the country, stayed away from home for more than a night or met anyone from another religion.

That matters to all of us. Broadening our children’s horizons isn’t just vital to their future, it’s crucial for our country.

One programme is doing just that and it’s a huge national success story.

National Citizen Service (NCS) gives young people aged 16 and 17 the chance to do something with their summer that will stay with them for life.

They might be hiking across hills or canoeing down rivers. Visiting care homes or raising money for local charities. Learning new skills, like how to manage a budget or give a speech.

Whatever they do, they’re experiencing camaraderie, service, responsibility and independence — none of which you get if you’re stuck indoors playing FIFA.

I came up with the idea of NCS before I became Conservative leader in 2005. I made it happen when I was Prime Minister.

And now I am helping to see it through as chairman of NCS Patrons.

Its growth is one of my proudest achievements in government. Four hundred thousand people will have graduated from the programme by the end of 2017.

This year 100,000 young people, one in six of all eligible teenagers, are taking part.

No other country in the world is as ambitious as this; it’s the fastest-growing youth programme on the planet.

Why is that so important? Because NCS is needed more than ever.

Everyone knows we live in a competitive, high-pressured world. But there are some things you need beyond exam results.

Like confidence, teamwork, resilience. The ability to pick yourself up, dust yourself off and try again.

These so-called “soft” skills are vital to the world of work.

And the teens of today, certainly the ones I’ve met who are doing NCS, are desperate to get them on their CVs.

The skills you gain and connections you make on NCS make a difference in tackling inequality, too.

Our top professions are stuffed with people from wealthy backgrounds. Why?

Because mums and dads can fix up great internships and extra-curricular opportunities that give better-off children these skills in spades.

That unfairness has to end.

So it is crucial that NCS is funded by government, requiring a maximum of £50 from each participant as a contribution, with bursaries for those unable to meet that cost.

I’ve seen for myself what a difference it makes.

I’ve met shy pupils who have turned into great public speakers. Disruptive kids who have found a positive place to channel their energy.

And I’ve seen the results. Participants from disadvantaged backgrounds are almost 50 per cent more likely to go to uni than their friends who haven’t done the programme.

Seven out of ten say they feel more confident about getting a job in the future.

It is even decreasing anxiety levels in the teenagers who take part. And there is another bonus to NCS.

We live in a world where division and hatred are all too real. A world where intolerance of others can lead to the most horrific consequences, whether at a concert in Manchester or outside a mosque in Finsbury Park.

Tackling terrorism is the first task of government. But something we all need to do is help build a stronger society. One in which everyone feels they can play a part and everyone feels at home.

There is no more active driver of inclusion than NCS. The whole point of it is to bring people together: Male and female, black and white, rich and poor, gay and straight, those of different faiths and those of none.

At NCS they are united in doing good.

Since 2010, 16- to 24-year-olds have moved from being the least likely to volunteer to the most likely, and the Office of National Statistics has linked that to the introduction of NCS.

That is why I’m so pleased to announce a further boost to the programme today as we unveil our first line up of patrons. We’ve got social media stars like Jamal Edwards. Football chief David Sheepshanks. The businesswoman and Apprentice judge Karren Brady. Journalists like Robert Peston. Entrepreneurs like Waheed Alli.

And the biggest hitters from the media to the Armed Forces, the charitable sector to education, politics to sport.

Together, alongside thousands of NCS graduate champions, we will get a really important message out there to parents, teachers and teenagers: NCS can change your life . . . and it can change our country, too.