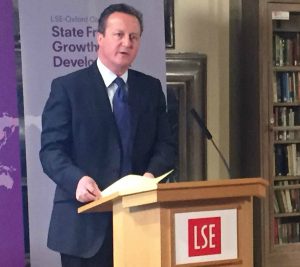 The LSE-Oxford Commission on State Fragility, Growth and Development was launched on 16 March 2017 at an evening event at the LSE featuring an opening speech by Former UK Prime Minister and Commission Chair David Cameron.

Established under the auspices of the IGC, the Commission will generate policy recommendations for governments, international donors, and NGOs to better support economic growth in countries facing fragility and conflict. It will focus on the underlying causes of state fragility and analyse an extensive evidence base to form its recommendations.

In his speech, Mr Cameron focused on the urgency and the UK’s moral imperative to support countries facing fragile and conflict situations.

“I’ve seen for myself the impact – often the tragedy – wrought by governments that are unable or unwilling to protect or provide for their own people,” said Mr Cameron. “I am convinced this is the right issue for us to be taking on.”

Professor Sir Paul Collier, who serves as academic director of the commission alongside Professor Tim Besley, outlined the causes of fragility and the issues the commission seeks to tackle.

“…There is a set of countries that haven’t managed to escape fragility. And so periodically when they meltdown, their population is displaced and it never gets to go back. That is the problem that this commission needs to address…” said Professor Collier.

In their remarks, Mr Kaberuka and Professor Woods discussed the major challenges facing governments and donors in fragile and conflict situations.

“[Capacity building] is tough, it takes time, but it’s best built internally, not built by outsiders,” said Mr Kaberuka, referring to the importance of a country building functioning institutions including an effective tax system and civil service.

Professor Woods outlined three ‘perennial’ tensions facing the international community working in fragile and conflict situations: 1) the desire to help instantly to the detriment of long term capacity building, 2) the political risk aversion of donor governments, and 3) the lack of donor coordination in countries.

The Commission, which also held its first meeting prior to the launch event, will shortly begin holding evidence sessions with policymakers, business leaders, academics, NGOs, and other stakeholders who have experience in fragile and conflict situations.

“State failure is not a one-way street,” said Mr Cameron. “And with our findings, we can set out the road map of recovery for more countries than ever… The work to unearth the right answers starts now.”