Genomics as a catalyst for innovation 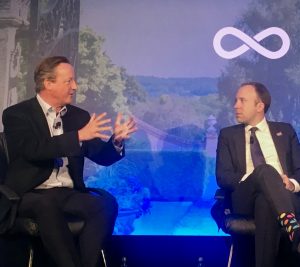 Taking part in a panel session chaired by Illumina Executive Chairman, Jay Flatley, David was joined on stage by Secretary of State for Health and Social Care, the Rt Hon Matt Hancock MP, to discuss genomics as a catalyst for innovation.

To an audience assembled from around the world, David explained his work as Prime Minister establishing Genomics England in 2014 and the ground-breaking research the organisation has accomplished over the last five years, working closely with the NHS. He set out how genomics became a priority during his time in No10 and why, since leaving office, he continues to be involved in genomic research.

In doing so, David explained his own family’s experience following the birth of his first child, Ivan, who suffered from cerebral palsy and Ohtahara Syndrome, a rare and severe form of epilepsy. Ivan very sadly died in 2009, aged just six. It was that experience that shaped David’s interest in genetic medicine and research and ultimately led him to push for the creation of Genomics England. Over the past five years, they have led the way in harnessing genetic research as a medical tool, showing the potential genomics has to transform the way we diagnose and treat a wide range of serious diseases, including cancer, diabetes, arthritis and dementia.

Today’s conference was an opportunity to share best practice with other countries, highlight the potential of genomics to change the way we think about disease and healthcare, and consider its potential to create a genuinely predictive, more personalised healthcare system.

The Summit came on the back of news yesterday that the UK government has sought to further build on David’s legacy in genomics by launching a £200 million whole genome sequencing project that will examine and sequence the genetic code of 500,000 volunteers at the UK Biobank. This, the world’s most detailed whole genome sequencing project, will harness new data that will be used to improve human health through the prevention, diagnosis and treatment of serious and life-threatening illnesses. Through the Biobank research, industry can work with experts to create new treatments and preventative measures which will help those suffering from illnesses and may eventually reveal why some people develop diseases and others do not.

This work complements the 100,000 Genomes Project already completed by Genomics England in partnership with NHS England, first commissioned by David Cameron as Prime Minister. The government has now committed to carry out five million DNA analyses by 2024, showing how the UK is seizing the opportunities that research in this area offers.