David Cameron meets with the British Chamber of Commerce in Shanghai 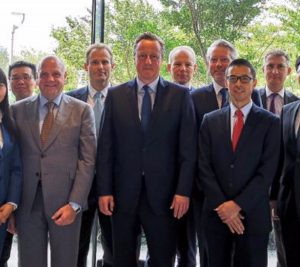 Article from the British Chamber of Commerce Shanghai.

On Wednesday, 5 September, the British Chamber of Commerce Shanghai hosted a lunch with David Cameron at the Mandarin Oriental Pudong. Members from a wide range of industry sectors attended the lunch and shared with Mr Cameron the opportunities and challenges that British companies face while operating in China. Mr Cameron introduced his vision of starting a new UK-China Fund to help continue to build on the ‘Golden Era’ of Anglo-Chinese relations he started while he was Prime Minister, with President Xi.

After the lunch, Phil Roebuck, CEO of British Chamber Shanghai, and Head of the UK-China Hub for Offshore Wind (the Hub), briefed Mr Cameron on the offshore wind market in China, the Hub’s role of supporting British businesses in the sector to enter China, and the Hub’s achievements since its establishment in 2017.

Mr Cameron made a brief stopover in Shanghai and then went to Yancheng City, Jiangsu Province to attend the 2018 Yancheng Green Smart Energy Summit and delivered a keynote speech. Both the Head of the Hub, Phil Roebuck, and Deputy Head, Aria Wang, attended the summit.