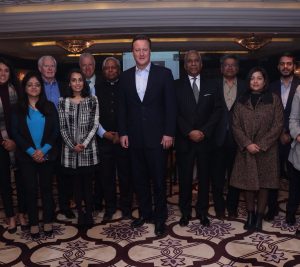 This morning David Cameron chaired a meeting in New Delhi, India, with India’s Principal Scientific Adviser, Professor VijayRaghavan; representatives from Invest India, the official investment promotion and facilitation agency of the Indian government; key scientific and political stakeholders from across India; and representatives from US-based genomics firm, Illumina, to discuss India’s National Mission on Genomics (NMG) and the potential genomics research could bring to India.

Through India’s NMG, the government have set out their plans to make genomics and precision medicine an integral part of the public healthcare system, specifically with regard to healthcare priorities such as cancer, diabetes, and communicable diseases.

Mr Cameron was able to set out the progress made in the UK through Genomics England and the 100k Genomes Project, which was commissioned by Mr Cameron while he was Prime Minister, and where there might be opportunities for India to benefit from the UK’s own experience in setting up a large scale national genomics programme.

The meeting helped raise awareness of the infrastructure and collaboration required to successfully undertake a large-scale genomics initiative and the practical steps that would be needed for partners in India to work towards developing a consolidated genomics research programme.