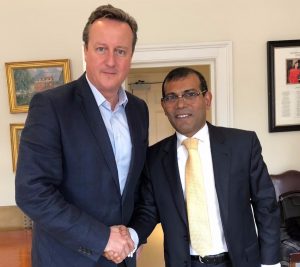 Mr Nasheed was imprisoned in 2015, a conviction deemed as “politically motivated” by Amnesty International. He was granted asylum in the UK in 2016. Commenting after the meeting, David Cameron reaffirmed that “the UK has always stood up for democracy and against corruption in the Maldives”. During the meeting topics such as democracy, human rights and developments in the Maldives were discussed.