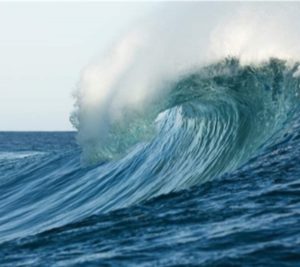 Article by David Cameron and John Kerry, published in The Telegraph.

The ocean produces half the world’s oxygen, feeds the clouds that give us fresh water and helps regulate our climate. It brings us food, creates jobs and even helps make our medicines. Water is life, and 97 per cent of it is contained in our seas.

Yet the seas upon which we depend are in trouble – a crisis that was brought to life in the BBC’s Blue Planet II last year. The warning from Sir David Attenborough is stark: “The oceans are under threat now as never before in human history.”

Destructive and illegal fishing practices are resulting in more and bigger boats fishing for fewer and smaller fish. More than 90 per cent of the world’s stocks are now fully or over fished.

Around thirteen million tons of plastic makes its way into the ocean each year – more than ten per cent of all plastic that is made. Birds and marine life then become tangled in it and ingest it.

Then there is climate change, which has warmed the ocean to a dangerous degree causing the loss of half of the world’s coral reefs and even changing the chemistry of the water by making it more acidic. We are feeling the backlash of such warming in the hurricanes, typhoons, heatwaves and floods that are striking us with increasing regularity. The two of us know from our respective times in office how supposed “once every hundred years” weather events seemed to be happening every few years.

The good news is that we have some of the answers in front of us. We have the ability to draw a line around some of the most precious areas of ocean to create marine protected areas (MPAs). There can be no industrial fishing or mineral recovery in these MPAs, only local fishing. That can then replenish fish stocks and build resilience to climate change by giving marine flora and fauna places where they can adapt to changing conditions.

MPAs are most successful when they are large, isolated and in place for at least 10 years. And they go hand in hand with our global efforts to combat climate change and ensure sustainable fisheries. MPAs can be found in waters from tropical Easter Island to the frigid Ross Sea near Antarctica.

The UK and US are world leaders in protecting the ocean. In 2015, the UK created what was then the world’s biggest MPA around Pitcairn Island, one of its overseas territories. That year the government committed to creating a “Blue Belt” around all 14 of its overseas territories in an unprecedented effort to conserve over 4 million kilometres of ocean. For its part, the US expanded the Papahanaumokuakea Marine National Monument in 2016, to make it the largest MPA in the world at that time. There are today over 1,700 marine protected areas established by federal, state and territorial governments in US waters.

In order to make sure they are successful, we must make sure MPAs and fisheries are properly enforced. GPS and satellite technology, marine patrols and policing are vital to that. That requires collaboration with other nations. That, in turn, requires them to create their own protected areas, so the responsibility of enforcement can be shared.

At the moment, only 3.7 per cent of the world’s ocean has any level of protection, while just 2 per cent is strongly protected. We must do better. Indeed, the International Union for Conservation of Nature has recommended safeguarding at least 30 per cent of the ocean by 2030 to help maintain biodiversity and sustain the long-term health of marine ecosystems.

That is why we are announcing today that we are co-chairing the Pew Bertarelli Ocean Ambassadors, which aims to support countries’ efforts to secure and implement MPAs.

We believe this initiative can have an impact by mobilising leading ocean advocates from every corner of the globe.

The two of us believe we can help galvanise global willpower to respond to the crisis in the ocean. We know how important the issue is. We know what it is like to be in office and to be confronted with many competing duties and obligations. And we know what a difference governments can make. In 2015 the UK brought in legislation that forced shops to charge for plastic carrier bags. It was controversial at the time, but the seven biggest retailers have reported an 83 per cent fall in the number of bags issued. That has been linked to a 40 per cent drop in plastic bags found on beaches in the UK.

The opportunities offered by MPAs are not limited to the developed world. The Southern Ocean around Antarctica offers an excellent opportunity to expand the percentage of protected ocean. The Micronesian archipelago of Palau is a trailblazer, having set aside 80 percent of its territory as the Palau National Marine Sanctuary.

We need the whole world to get on board with this endeavour. Mankind caused this crisis, and we have to be the ones to end it. We have made such strides before. We have saved animals from extinction. We have mitigated against the by-products of industrialisation. When it comes to this vast challenge, it will take the efforts of donor countries and the developing world, governments and businesses, individuals and whole communities, to turn things around. As Ocean Ambassadors, we are determined to play our part.