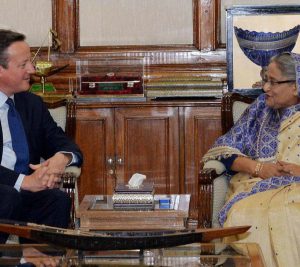 On 27 April, during his first visit to Bangladesh, former UK Prime Minister David Cameron participated in a roundtable discussion hosted by IGC Bangladesh on State Fragility, Growth and Development: Bangladesh’s Progress in Dhaka.

The roundtable aimed to understand and draw lessons from the ‘Bangladesh paradox’ – a term illustrating that despite weak political institutions, the country has managed to maintain impressive economic growth rates of over 6% per year over the last two decades. The growth has been inclusive with laudable reduction in poverty and improvements in education and health indicators.

Mr Cameron participated as part of his role as chair of the LSE-Oxford Commission on State Fragility, Growth and Development. The commission, launched in March 2017, aims to guide policy on economic growth in fragile and conflict situations through research.

Below are some of the major points discussed during the roundtable:

Also during his visit to Bangladesh, David Cameron met with the Prime Minister Sheikh Hasina (pictured).