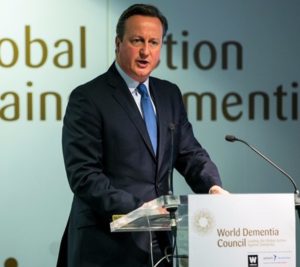 Few things are as sad as seeing someone with advanced dementia for the first time.

For many people, it is watching a relative they love slipping into a world of darkness.

For me it was as an MP visiting a care home and seeing the pain in a son’s eyes as he could see his mother no longer knew who he was.

Not only did that disease rob her of her past – her memories, her words, her knowledge of the world.

It also robbed her of her future.

Because there was – there still is – only one outcome for people diagnosed with this cruel disease.  Dementia only goes in one direction.

And millions of people, like that mother and son, are dealing with the reality of that every day.

As well as sorrow and sympathy, I felt other emotions too.

…at the wider acceptance of its consequences…

…and at the assumption that this woman’s suffering was just a natural part of aging.

We know now that dementia is caused by diseases of the brain, such as Alzheimer’s.

This is what I call the perception challenge.

And I was frustrated by just how far behind other diseases we were in combatting it.

Look at the leaps made over the last few decades.

Cancer – we are cracking it.

HIV – it is no longer a death sentence.

There is currently no way of slowing it.

There is no way of halting it.

There is no cure for it.

That is what I call the medical challenge.

And action is long overdue.

For me the starkest fact is this.

We could do little more for that woman I met than Dr Alzheimer could do for his patients in 1901.

Just think about that for a second.

Imagine if we said that about so many other diseases – like TB, pneumonia, dysentery.

They were the biggest killers of that time.

But over the years, preventions, treatments, cures – they’ve all come along.

Dementia is our biggest killer.

We have to confront it with everything we’ve got.

It falls to all of us to do so – particularly to people in positions of leadership.

They can use their voices to tackle the perception challenge.

And they can use their power to tackle the medical challenge.

As the leaders of the world came to Lough Erne in County Fermanagh, I was able to decide what to put on the global agenda.

Because during the year of our G8 presidency, all eyes would be on the UK.

I was in no doubt about what we should be highlighting.

With 50 million people around the world living with dementia, this was a global challenge.

So, we followed up that main summit in Northern Ireland with an extra summit – the first ever global gathering on dementia.

As we know, that is how the World Dementia Council came about.

And it is how we arrived at this big, ambitious, game-changing goal:

A disease-modifying treatment by 2025.

Now in politics, a week is a long time.

But in science it’s nothing.

And yet look at the strides that have been made towards that goal – and so many other goals when it comes to defeating dementia – in just half a decade.

Scientists have discovered new risk genes for the diseases that cause dementia.

We are learning more about the role inflammation has to play in Alzheimer’s.

Just as our understanding of the immune system is helping to tackle cancer, the same can apply to Alzheimer’s.

And new evidence suggests that a third of dementia cases could be prevented if several risk factors could be eliminated.

Getting key institutions up and running is so important to all this.

And now the UK Dementia Research Institute, which we founded in 2015, is well established…

…a centre of excellence…

…and, crucially, bringing in leading research scientists from otherresearch fields to help shed new light on this age-old problem.

The institute has just formed a partnership with the Dementia Discovery Fund, which matches those companies developing disease-modifying medicines with venture capital.

We started that in government as well, in 2015.

It is the only organisation of its kind.

And it has grown into a $350m drug investment fund, with supporters like Bill Gates.

The things they are focusing upon – mitochondrial dynamics, membrane biology, synaptic physiology and function – these may sound esoteric to a lot of us in this room.

But they are the areas of discovery which may stop us – our children, and their children – from developing the diseases that cause dementia.

Of course, our progress goes beyond medical research.

There is increased awareness.

…more and more people are raising money for dementia…

…and more and more people are becoming Dementia Friends – two million in the UK alone, including my entire Cabinet as Prime Minister.

As well as awareness, there is care.

The world is a better place for people living with dementia than it was five years ago.

However, there is so much further to go on all these fronts.

We are in a race against the clock.

The number of people with diseases such as Alzheimer’s is predicted to treble by 2050, to 150 million people worldwide.

So, I believe there are three things we need to focus on.

We should be clear about what we are aiming for. We need to make it tangible.

Every day lots of us take a little pill – a statin – that keeps our cholesterol down.

This has radically transformed the number of people dying from heart disease.   We need what I call a “statin for the brain” that reduces the risk of developing dementia or halts the early disease process.

That should be linked to a wider awareness about prevention.

Just 34 per cent of people think it’s possible to reduce their risk of dementia, compared to 77 per cent for heart disease.

The point is we can reduce risk – and the more research that takes place, the more we will understand what those contributing factors are.

Part of the challenge is to counter the lack of understanding.

At the moment, when we try to help people with dementia, it is often too advanced.

As with cancer, early diagnosis is crucial.

We need to detect the diseases that cause dementia 10-15 years before symptoms appear, much earlier than we do today.

Developments in big data and artificial intelligence are going to help with that massively.

They mean we can examine not just new datasets, but old ones too.

And where it used to take decades to go from trial to data to drugs, we can concertina that process and get answers, faster.

I am so pleased to see projects in the pipeline that will take that to the next level.

Not only the sharing of massive amounts of clinical data – and the ability for researchers to interrogate it.

But building on that clinical data with digital data, collected from people’s smart watches, fitness devices and phones.

Because in the future it may well be that early signs come to light through wearable technologies or internet use, rather than traditional brain scans and blood tests.

…and, ultimately, an Artificial Intelligence algorithm that is built into devices and can be used across the entire population.

That is incredibly exciting, and so is the government’s announcement today that up to five million people will take part in research to develop the sort of technologies that will transform the early detection of diseases like dementia.

Every day, we’re taking a step closer to that goal of early diagnosis – and I’m delighted with the important role Alzheimer’s Research UK is taking in this work.

I’m proud of the decision made when I was Prime Minister to double annual government funding for dementia research.

And yet despite being our country’s biggest killer, it still receives less funding than other major diseases.

If we increased funding to just 1 per cent of the cost of dementia, we could see the sort of developments we’ve seen in cancer over the last few decades.

Five years ago, when I sat around that G8 table, I was daunted when I explained the challenge to prime ministers and presidents.

But today I am more confident.

I believe there is light at the end of a very long tunnel.

Because the mission is clear.

The method is evolving.

The means are there if we demonstrate sufficient political will.

The key people are there too – from science, politics, business, charity and philanthropy.

We have all the tools and the will needed to defeat dementia – from the data in old textbooks to the smartwatches on our wrists.