David Cameron served as Prime Minister of the United Kingdom of Great Britain and Northern Ireland from 2010 to 2016, leading Britain’s first Coalition Government in nearly 70 years and, at the 2015 General Election, forming the first majority Conservative Government in the UK for over two decades. 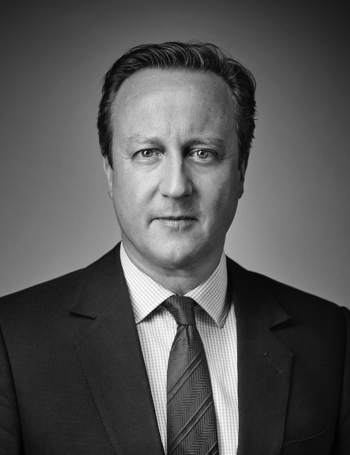 In doing so, he became the UK’s youngest Prime Minister since Lord Liverpool in 1812 and, in 2015, the first ever British Prime Minister to increase both their party’s share of the vote and their number of seats in the House of Commons, having already served a full term as premier. It was a clear mandate from the British people and a simple instruction: to continue turning the country around.

David Cameron came to power in 2010 at a moment of economic crisis and with an unprecedented fiscal challenge. Under his leadership, the UK’s economy was transformed. The deficit was reduced by over two-thirds; one million businesses were set-up; a record number of jobs were created (1,000 extra jobs for every day he was Prime Minister); and Britain became the fastest-growing major advanced economy in the world. That created the stability David needed to cut taxes, introduce a National Living Wage, transform education, reform welfare, protect the National Health Service, and increase pensions.

The difficult decisions he took meant that while the economy grew, the number of families stuck on welfare fell; the number of students attending university – including those from disadvantaged backgrounds – increased rapidly; and the number of people in work was higher than at any previous point in British history. 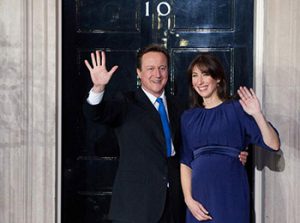 Internationally, David Cameron developed a foreign policy in the post-Iraq era that addressed the new challenges of the Arab Spring, as well as a more aggressive Russia, while ensuring that Britain played a full role in the global fight against ISIS. He worked to ensure that Britain built a strong partnership with India and became China’s preferred partner in the West. Throughout, David championed Britain’s special relationship with the US, working closely with President Barack Obama.

After hosting the successful London 2012 Olympic and Paralympic Games, David chaired the 2013 G8 Summit at Lough Erne in Northern Ireland, where he highlighted the global need for fair taxes, increased transparency and open trade. 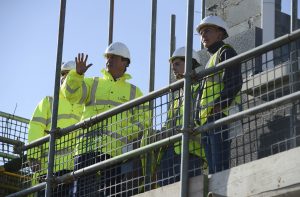 Following this, David co-chaired a UN High Level Panel, working with world leaders to agree the UN’s new Sustainable Development Goals (SDGs). In particular, David promoted what is now SDG 16 – the idea that too many people are held back in poverty because of corruption, rotten government, and lack of access to justice. The principles underpinning SDG 16 – peaceful and inclusive societies; access to justice; and effective, accountable and inclusive institutions – are international values David continues to champion.

In 2014, David promoted another country of the United Kingdom, by chairing the NATO Summit at Celtic Manor in Wales. 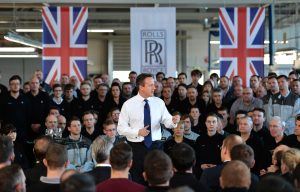 David always believed that he should confront the big decisions. He championed environmental issues with the aim of delivering the greenest ever government – as such he grew the British economy while carbon emissions fell sharply; created the world’s first Green Investment Bank; committed the UK to providing long-term protection to over 4 million square kilometres of marine environment across the UK Overseas Territories, known as the ‘Blue Belt’; and ensured that the UK played a leading role in the successful Paris Agreement on climate change.

Under his leadership, the UK committed to the NATO 2 per cent defence spending target and a rising national defence budget, but also stood up for the world’s poorest by meeting the UN commitment of 0.7 per cent aid and development spending – the first, and so far only, major country in the world to do so.

He led the way internationally by passing the UK’s Same Sex Marriage Act, enabling those who love each other to get married whatever their sexuality. 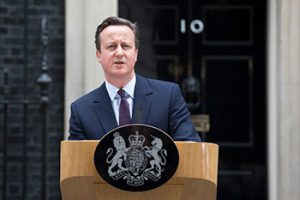 David fought both campaigns the only way he knew how, which was to say directly and passionately what he thought and believed was right – head, heart and soul. In winning the 2014 Scottish referendum he ensured Scotland remained part of the United Kingdom. However, despite David arguing that Britain was stronger, safer and better off inside the European Union, in June 2016 the British people voted to leave the EU. Following this defeat, David resigned as Prime Minister and Leader of the Conservative Party, leaving 10 Downing Street on 13 July 2016. In September 2016, he resigned as a Member of Parliament. 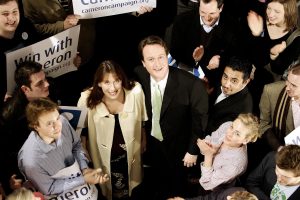 David Cameron became Leader of the Conservative Party in 2005, after serving less than five years as a Member of Parliament. He was elected on a mandate to reform and modernise a party that had lost three elections in a row. Believing in a modern compassionate conservatism is why David ran for Leader; it is what led him to form the UK’s first Coalition Government in seven decades, and it is how he governed as Prime Minister.

During his leadership of the party, he promoted social justice and social action; advanced the green agenda; set protecting the NHS as a top priority; and was proud to see a significant increase in the number of women and ethnic minority candidates standing for the Conservative Party and elected to Parliament.

His vision has always been of a country where everyone – whatever their background – can succeed; where we always look out for those who are less fortunate; where every part of the country is brought together. Ultimately, it comes back to some core values: aspiration, compassion, responsibility, freedom. These are the things David believes in. They underpinned his leadership of the Conservative Party and his premiership, and they lie at the heart of his One Nation vision. 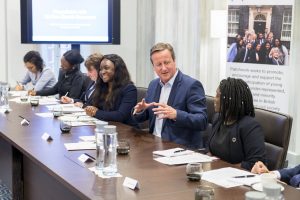 David was elected Member of Parliament for the rural constituency of Witney in West Oxfordshire in 2001. He held a number of positions on the Opposition Front Bench prior to becoming Party Leader. After the 2005 General Election, he was appointed Shadow Secretary of State for Education and Skills. He had previously held the positions of Shadow Deputy Leader of the House of Commons in 2003; Front Bench Spokesman for Local Government Finance in 2004; and Head of Policy Co-ordination in the run-up to the General Election of May 2005. He was also a member of the influential House of Commons Home Affairs Select Committee between 2001 and 2003.

Before he became a Member of Parliament, David worked in business and government. He was educated at Eton College and Brasenose College at Oxford University, studying Philosophy, Politics and Economics (PPE) and gaining a First Class Honours degree. After graduating, he joined the Conservative Research Department where he worked for Prime Minister Margaret Thatcher and her successor John Major, who he advised for Prime Minister’s Question Time. He was later appointed a Special Adviser in government, first at the Treasury and then at the Home Office. Afterwards, he spent seven years at Carlton Communications, one of the UK’s leading media companies, and served on the management board. 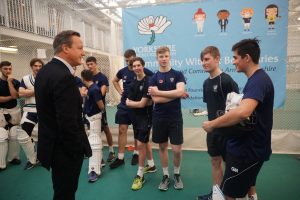 David is Chairman of Patrons at National Citizen Service (NCS), the UK’s flagship youth development programme that brings together teenagers from all parts of the country for a part-residential experience, with 30 hours committed to a local community project.

He is also President of Alzheimer’s Research UK, Britain’s leading medical research charity with a special focus on funding bio-medical research into the cause, prevention and cure of dementia.

And continuing the instrumental role he took while Prime Minister advocating UN Sustainable Development Goal 16, he has been working with the London School of Economics and Blavatnik School of Government at Oxford University by chairing the LSE-Oxford Commission on State Fragility, Growth and Development, under the auspices of the International Growth Centre. In April 2018, the Commission produced a report, Escaping the Fragility Trap, with recommendations that amount to a new approach to state fragility and international aid. He also sits on the Global Board of Advisors at the Council on Foreign Relations; is a Board member of the ONE Campaign; and together with former US Secretary of State, John Kerry, co-chairs Pew Bertarelli Ocean Ambassadors. 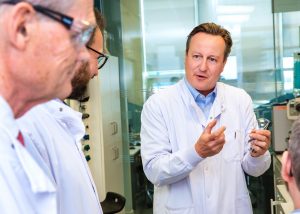 Further to these roles, David is advising and working with a number of international businesses, all concentrating on innovative technology-driven sectors, including Fin-Tech, Medi-Tech and AI.

His autobiography, For the Record, was published by HarperCollins in September 2019.

Family has always been the most important part of David Cameron’s life, sustaining him through his political career and premiership. David and his wife, Samantha, have three young children: Nancy, Elwen, and Florence, who was born in 2010 while her father was Prime Minister. Very sadly their much-loved eldest child, Ivan, who suffered from cerebral palsy and Ohtahara Syndrome, a rare and severe form of epilepsy, died in February 2009, aged six.

Since leaving Downing Street, Samantha Cameron has started her own fashion label, CEFINN, which she runs as Creative Director and Founder.

The family live in London and West Oxfordshire.

The Office of David Cameron makes donations to charity through a rolling annual programme of charitable giving to a range of charities and good causes close to David and Samantha Cameron’s hearts – principally those associated with our Armed Forces and veterans, disabled and ill children, and Alzheimer’s. The donations take into account all profits David Cameron has received related to the publication of his autobiography after related third-party expenses.