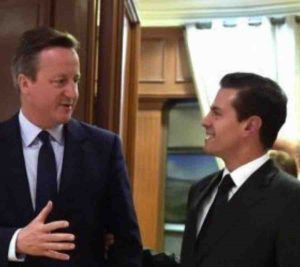 During a visit to Mexico, David Cameron met with President Enrique Peña Nieto at the Official Residence of Los Pinos in Mexico City.

At the meeting, President Peña Nieto thanked David Cameron for the opportunities for collaboration created during his administration and emphasised that they continue to benefit both countries. Reflecting on the strong relations that have been established between the UK and Mexico, he fondly recalled his State Visit to the UK in 2015 and the warm welcome he received. They looked ahead to the forthcoming Mexican elections in July and discussed current economic and foreign policy issues.

Later, David Cameron met with business leaders and civil society organisations to discuss this year’s elections and the progress being made in Mexico in the fight against crime and corruption.

David Cameron was pleased to be able to visit the Leonora Carrington exhibition at Mexico City’s Museum of Modern Art. The ‘Magical Tales’ exhibition is part of the 75-year celebration of the British Council in Mexico and celebrates the life of the British-born Mexican surrealist artist and novelist.