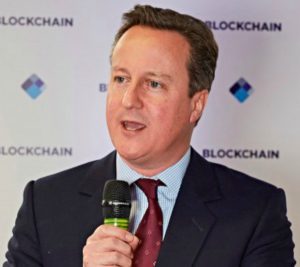 He was particularly proud to launch Blockchain in London because of the potentially “transformational” public policy applications of Blockchain technology “to fight corruption and to deal with failures of governance and governments and the rule of law all over the world.”

Opening the new office space, David Cameron said, “The more I was Prime Minister, the longer I did the job, the more I could see that corruption and the failure of governments, the failure of rule of law, the presence of conflict in so many countries, was actually what was keeping them and their people trapped in poverty.”

Blockchain is a method of storing information online in timestamped ‘blocks’. It is decentralised and managed by collective networks. Information can only be changed with the consent of the community. Editingrequires changing every subsequent block, thereby leaving a clear record of activity. This means that it is very difficult for blocks to be surreptitiously altered or deleted by one source or actor alone.

“But I think you also have the opportunity, if we can get it right, to help these governments and these countries to be less corrupt, to have the rule of law, and to have something else that we have in this country which sits alongside the rule of law, which is not just a set of rules but a sense of trust in the institutions that we use.”

“I think you’re on the brink of a very exciting revolution in all of those areas, which as someone involved in public life is very interesting. It’s great to be at the start of a revolution here in London, I hope you keep this revolution going, I hope the government hears loud and clear the things that you need, and I hope you go on succeeding and growing.”

In his remarks, David Cameron said how delighted he was to see London’s growth and development as a technology centre. “I’m very proud of what we did in office to support Tech City. It was happening anyway but we got behind it, we worked with you, we tried to go through all the things that Tech City needed to really take off, whether that was broadband speeds or available property or some of the big tech companies coming and locating here. I really want that to continue to be a success. I also want us to be a success specifically in FinTech.”

In 2015, the government set the ambitious goal of making Britain the ‘leading FinTech centre in the world’, appointing Eileen Burbridge as the UK’s Special Envoy and working to reduce barriers to the growth of the sector. Today, FinTech is flourishing; adding more than £6.6 billion to the UK’s economy and attracting more than £500 million of investment. It is one of Britain’s fastest growing sectors.

David Cameron commented, “It seems to me there is this massive potential of disruptive technology and insurgents and startups that can take on the jobs, investment, and prosperity of the future. It’s so important we have some of those insurgent businesses right here in London and not just in the United States.”

“The City of London has always been a fantastic innovator and we need to be as good an innovator in digital as we have been in the analogue world.”