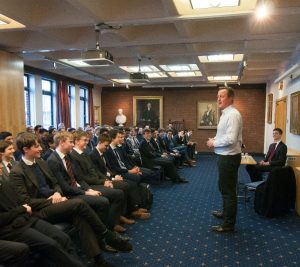 Mr Cameron started by detailing some of the challenges that come with the role of Prime Minister. These included the unpredictable nature of the job and the workload involved. He went to great lengths to praise the Civil Service for all that they do to support the government in tackling these challenges. The floor was then opened to questions and Mr Cameron was given a broad range of topics to address, including the Scottish referendum, the role of the monarchy, the referendum on Britain’s membership of the European Union, anti-corruption and the role of governance, and immigration, to name but a few.

He concluded the session with words of encouragement for those planning to study Politics post A-Level and, potentially, pursue a political career in the future.