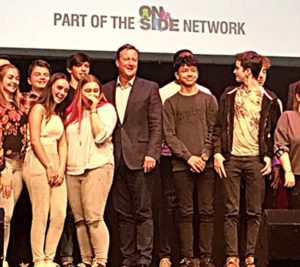 Mr Cameron, who set up the NCS programme while he was Prime Minister and is now Chair of the NCS patrons, addressed youngsters at the Warrington Youth Club event taking place at the town’s Parr Hall.

The NCS programme was set up to help inspire young people to gain in confidence and get involved in their local communities.

More than 100,000 youngsters have taken part since the scheme was launched.

During his visit he met local campaigner Adrian Derbyshire who has been delivering the programme for three years based at Chester Universities Padgate Campus.

Adrian said: “It is a fantastic programme and I am honoured to be part of it.

“It is fantastic see see youngsters gain in confidence and get involved in community events.”

Only last week a group of youngsters helped Adrian stage a music night at Penketh in memory of his late daughter Julia, who tragically took her own life as a result of online bullying.

They helped raise over £600 for his #Sassy anti-hate and anti-bullying campaign.