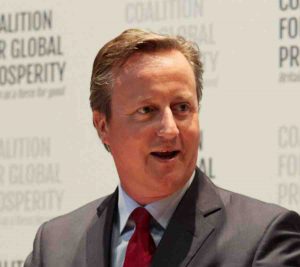 This evening military, political, business and faith leaders issued a united call for Britain to remain a force for good in the world. As the UK’s role in the world is being redefined, leading figures have come together to make the case that Britain is at its best when it acts as a global leader in development, as well as in defence and diplomacy.

Former Prime Minister David Cameron joined faith, military, political and business leaders at the launch of the Coalition for Global Prosperity to call for Britain to remain at the forefront of international development.

“With the country at a crossroads, the Coalition for Global Prosperity calls for ‘Global Britain’ to be a reality and not just a slogan. Now is the time for the UK to ensure it remains a force for good in the world. UK aid, alongside our defence and diplomatic strategy, plays a vital role in making the world – and Britain- safer, healthier and better off”, said Theo Clarke, Chief Executive of The Coalition for Global Prosperity.

The Coalition for Global Prosperity brings together leading figures and experts to discuss how Britain can remain a global player on the world stage and maximise the impact of its aid budget. At its launch former UK Prime Minister David Cameron spoke in Westminster, alongside Major-General James Cowan, CEO of the HALO Trust, Penny Mordaunt MP, Secretary of State for International Development, Becky Platt, NHS nurse and member of the UK Emergency Medical Team and Theo Clarke, Chief Executive of The Coalition for Global Prosperity.

Former UK Prime Minister David Cameron said: “Aid works. It saves the lives of the poorest, most desperate people around the world. And in doing so, it helps to keep us safe at home, assisting in the prevention of terrorism, pandemics, mass migration and piracy that often flourish in places of extreme poverty and fragility.

“One of my proudest achievements as Prime Minister was making Britain the first G7 country to spend 0.7 per cent of its national income on international development. It was a promise made to the poorest in the world – and a promise we kept. I saw how it enabled us to act – and act quickly – when the world needed us. When West Africa was ravaged by Ebola. When the Philippines was devastated by storms. When people were starving in the horn of Africa. And, of course, when Syria was torn apart by war and refugees desperately needed support.

“Britain stands tall in the world, and our aid commitment is an important part of that. The Coalition for Global Prosperity has an important role to play in demonstrating this, and I support it wholeheartedly.”

James Cowan CEO of the HALO Trust said: “I believe that Britain is a force for good in the world. We are a development superpower and incredibly well-regarded globally. UK aid flies the flag for Britain around the world and is one of our most effective means of global soft power.

“It is crucial that we continue to invest in aid – this is not only the right thing to do but is an investment in our national security. The threats Britain faces in today’s world require a combination of hard and soft power. We need an effective aid budget, alongside an active diplomatic and defence strategy, to protect ourselves.”

“Aid is the right thing to do. We not only have a moral duty to invest in aid, but this also keeps Britain safe. Health pandemics, like diphtheria, do not care about country borders. It is not in our interest to sit back and wait until these problems come to our shores, action needs to be taken before the problems grow.”

International Development Secretary Penny Mordaunt said: “Why in chaos and conflict do we find people like Becky Platt, a paediatric nurse from Watford leading the charge against diphtheria in Cox’s Bazaar, Bangladesh? Why do we care? Because that is what great nations do.

“The British public get that. They care about people, people they’ll never meet on the other side of the world. They understand the global connections between their own security and prosperity, and the rest of the world.”

She went on: “We have to forge confidence and belief we can make the world a better place. You, the Coalition, are going to be critical to that, so thank you for all the work you are going to do.”

Theo Clarke, Founder & Chief Executive of the Coalition for Global Prosperity, said: “At a time when the UK’s role in the world is being redefined, Britain is at its best when it acts as a global leader in development as well as in defence and diplomacy. There has never been a more important time to make the case for Britain as a force for good in the world and this is precisely why the Coalition for Global Prosperity has been set up.

Aid is not simply a moral responsibility, but an investment in Britain’s future. When we help to lift other countries out of poverty, we build a safer, healthier and more prosperous world for everyone.”